Our history has been a story of how we and fire have co-evolved. The same holds for our future. Wildfires are often not “wild” and can be linked to human activity. Hence, some claim that we are living in the “Pyrocene” [1]. Large-scale biomass burning events emit substantial amounts of primary particulate matter (PM) and gaseous secondary PM precursors. Fractions of these emissions can be injected into the free troposphere where they can be transported over long distances and exhibit a stronger radiative forcing efficiency than at ground level [2]. Large light absorbing carbon concentrations in the free troposphere can also alter the vertical temperature profile, leading to a stratification of the atmosphere below with consequences for clouds and precipitation [3]. This work characterizes the optical and microphysical properties of wildfire plumes transported to the Jungfraujoch (JFJ) Station (3571m a.s.l.). Forty-eight wildfire plumes were identified from hourly averaged data for the period between January 2015 and December 2020 using a data filter based on gaseous data and aerosol optical properties. The Figure below shows the scattering and absorption coefficients (a), the SSA and backscatter fraction (b), the source sensitivities (c) and the Mie theory derived simple forcing efficiency (d) of the most significant plume event in the period analysed, that originated from the Pedrógão Grande wildfire in Portugal in June 2017. Ongoing work validates the optical data filter with particle size distribution-, gaseous- and source sensitivities- data. In addition, plume occurrence frequency and plume microphysical properties will be presented at the conference. 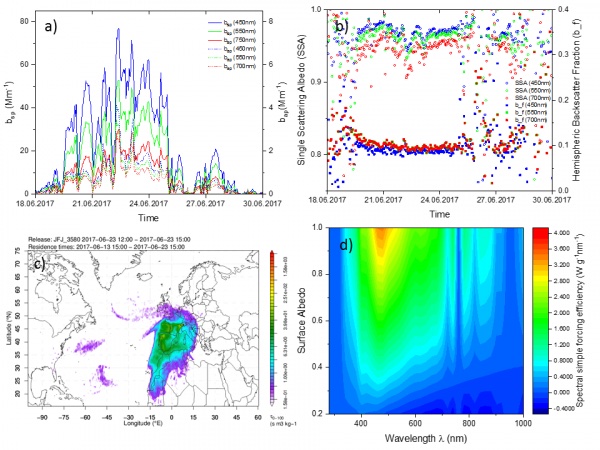