Today, wood stoves and boilers are estimated to account for 65-70% of particle and black carbon emissions in Denmark. At the same time, the legislation relates exclusively to type approval of stoves in the laboratory, which rarely reflects real-life emissions when used in private homes. A new Danish lighthouse project (2020-2023) demonstrates modern stoves and emission-reducing technology under real-life conditions in a dedicated residential neighborhood (test zone) in the municipality of Aarhus, Denmark. The objective is, from a cost-benefit perspective, to identify measures that provide most impact on real-life emission reduction from wood stoves, including automatic control stoves, low-emission stoves, new types of chimneys, draft boosters, ESP filters and catalysts. Additionally, digital apps can help the consumer firing more correctly. In order to evaluate effect of the various approaches, distributed low-cost sensors continuously quantify local air pollution levels (PM, CO, NOx, temperature, wind direction and speed). Through developed data algorithms, we expect to identify which point sources are actually problematic and which are acceptable. The distributed sensors are supported by dedicated point source emission measurements (PM, PN, NOx, CO, CO2, OGC).

The dedicated test-zone, with around 25 actively participating households, was established in the city of Mårslet in autumn 2020. Several outdoor and indoor sensors (Leapcraft) are mounted and continuously logging PM and gases in the 20/21 heating season. Present measurements in the 20/21 heating season will serve as a reference background for technical interventions targeting wood stove emission reductions during the coming two heating seasons. One of the main challenges in the data analysis is separating the wood stove signal from other sources. Present efforts involves pattern recognition and comparing with parameters such as background level, wind direction, relative humidity and chimney temperature. As an example, below is shown the PM1 concentration measured in a lamppost in the test zone (Præstegårdsvej) and background (Mårslet school) for a week by the end of January. In general, the concentration measured at Præstegårdsvej is significantly higher than at Mårslet school, very likely due to local sources of particles, of which wood-burning stoves are expected to make up a significant part. This is supported by the fact that the high concentrations occur in the evening and at night, where an increased use of wood-burning stoves can be expected. At ETH 2021 a more detailed analyses will be given on the above, expected to include a preliminary quantification of the signal from wood stoves - as well as results from reference measurements on individual chimneys in the test zone. 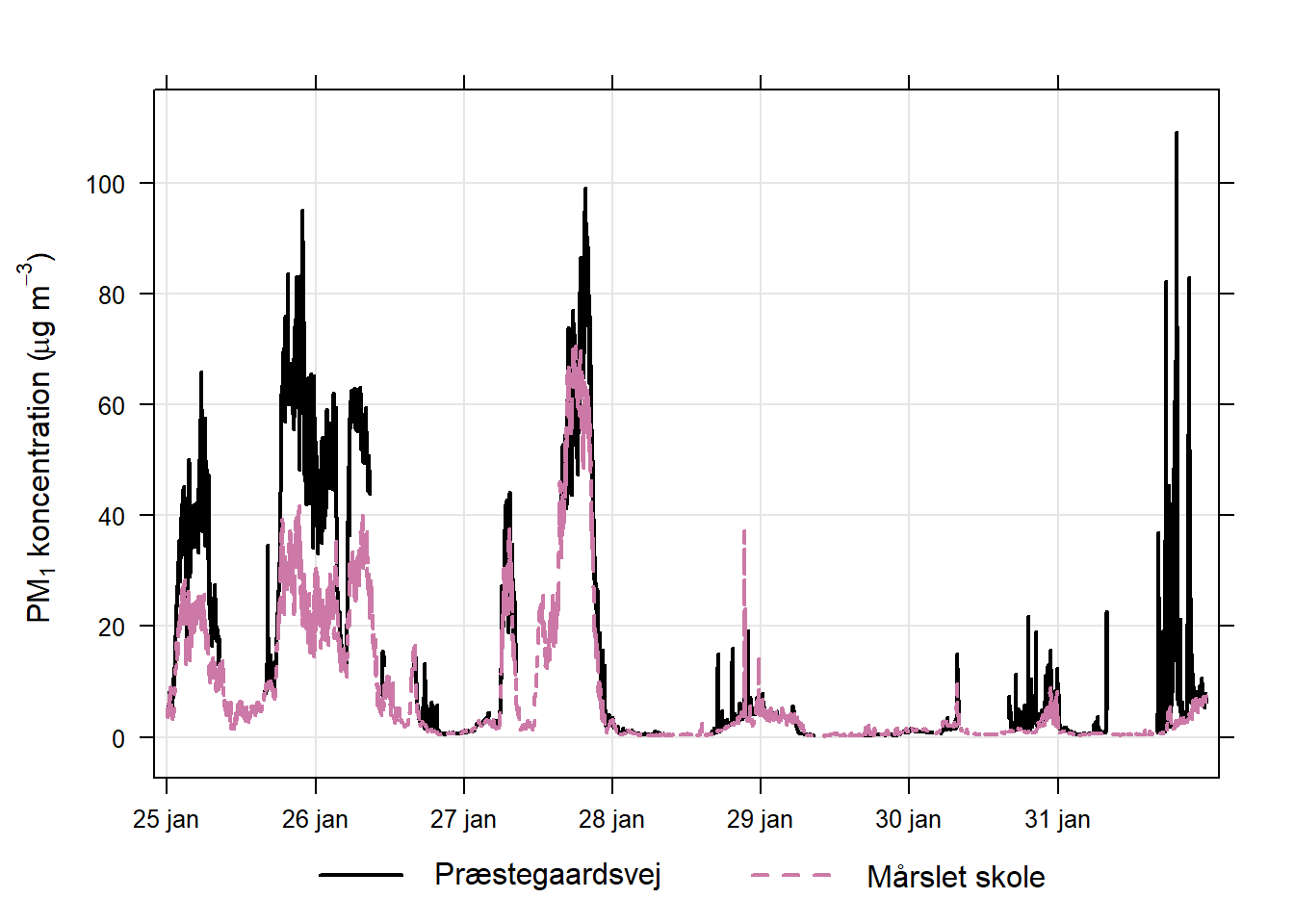